Prof. Dr. Mahmoud El-Metini, President of Ain Shams University, received the shield of Qena Governorate and a letter of thanks from Mr. Major General A. H. Ashraf Al-Daoudi, Governor of Qena, was handed over by Representative Naglaa Bakhoum, a member of the House of Representatives and a member of the Social Solidarity Committee, with thanks and appreciation for the success of the largest medical convoy in Upper Egypt, Qena Governorate, in the village of Abu Diab West, which was carried out by the university last March.

Prof. Dr. Mahmoud El-Metini expressed his great happiness with the success of the medical convoy that was held in the village of Abu Diab, stressing that the university is fully prepared to provide all means and support to serve our people in Qena Governorate.

For her part, Representative Naglaa Bakhoum confirmed that the work team of Ain Shams University, who is responsible for the medical convoy that was held in the village of Abu Diab West, deserves thanks and appreciation for their efforts for a period of 4 consecutive days. University and Professor Tarek Amer, Director General of Environmental Projects Affairs.

Bakhoum expressed her great happiness with the approval of the President of Ain Shams University for the work of two convoys in Qena, stressing that this will serve many ordinary citizens in Qena Governorate, as they will benefit from the service provided by the university and examination by professors and experts at Ain Shams University. 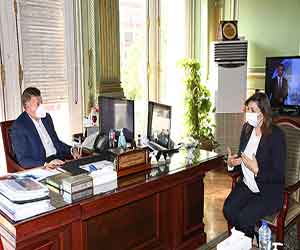