The activities of the international conference “Egyptian-Sudanese Economic Integration between Reality and Aspiration” were launched online via the Microsoft Teams program under the patronage of Prof. Dr. Mahmoud El-Matini, President of Ain Shams University and Prof. Dr. Hisham Tamraz, Vice President for Community Affairs and Environmental Development and Chairman of the Board of Directors of the Center. The conference was managed by Prof. Dr. Ashraf Mo'nis, Director of the Center and General Rapporteur of the Conference.

The conference will be held within the framework of the cultural season of the Middle East Research Center and Future Studies at Ain Shams University for the year 2020 - 2021.

Prof. Dr. Hisham Tamraz started the activities of the conference, where he delivered the opening speech, in which he praised the topic of the conference and its importance under the current circumstances. 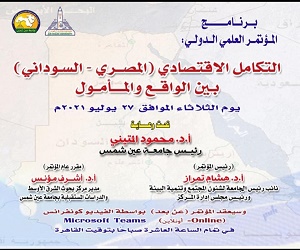 He dealt with the most important features of the historical relationship between Egypt and Sudan, which began with human existence since the early human formations that arose and existed in that northeastern part of the African continent, and presented the relationship associated with the formation of the Nile Valley, which constitutes an artery and basis for life that flourished on its banks since the dawn of history.

Where races and human elements coalesced between the north and south of the valley, forming the unity of the Nile Valley, and the truth is that that great river (the Nile River) is what united the inhabitants of Sudan and Egypt as an indissoluble unit, and there is no doubt that the relationship of the two countries to each other is an eternal and inevitable relationship (a life relationship ) Especially in modern times, as this relationship grew between Egypt, Sudan and the countries of East and Central Africa during the nineteenth century during the period of the Egyptian Ottoman rule, and then during the Egyptian-British dual rule. In Sudan, the relationship of the Sudanese with Egypt has also been strengthened throughout the ages until the present, within the framework of strong brotherly relations and common interests that bind the two countries together politically, economically and socially.

Under this eternal relationship comes the topic of the international scientific conference on the history and development of integration projects between Egypt and Sudan since the signing of the joint declaration document in Alexandria entitled: “Platform for political action and economic integration between Egypt and Sudan”, which makes it imperative for the two countries to integrate economic and political in order to form an economic and political force. It has its weight in a world governed by blocs and major powers and facing the recent challenges facing the two countries, especially the problem of the Ethiopian Renaissance Dam.

Prof. Dr. Ashraf Moanis affirmed to all the honorable participants and attendees, that the Egyptian-Sudanese relations are distinguished relations in the past and the present, unparalleled in the rooting and depth of the ties that linked the two peoples and the two countries throughout the ages.

Among the challenges facing the two countries in recent times is the file of the Ethiopian Renaissance Dam, which is at the forefront of the two countries’ interests in the framework of water cooperation between them

Or You Can Use The Advanced Search